India Won SAFF U-17 Championship against Nepal in the final

Defending Champions India finished off a clinical performance to clinch the SAFF U-17 Championship title defeating a 10-man Nepal 4-0 in the Final. 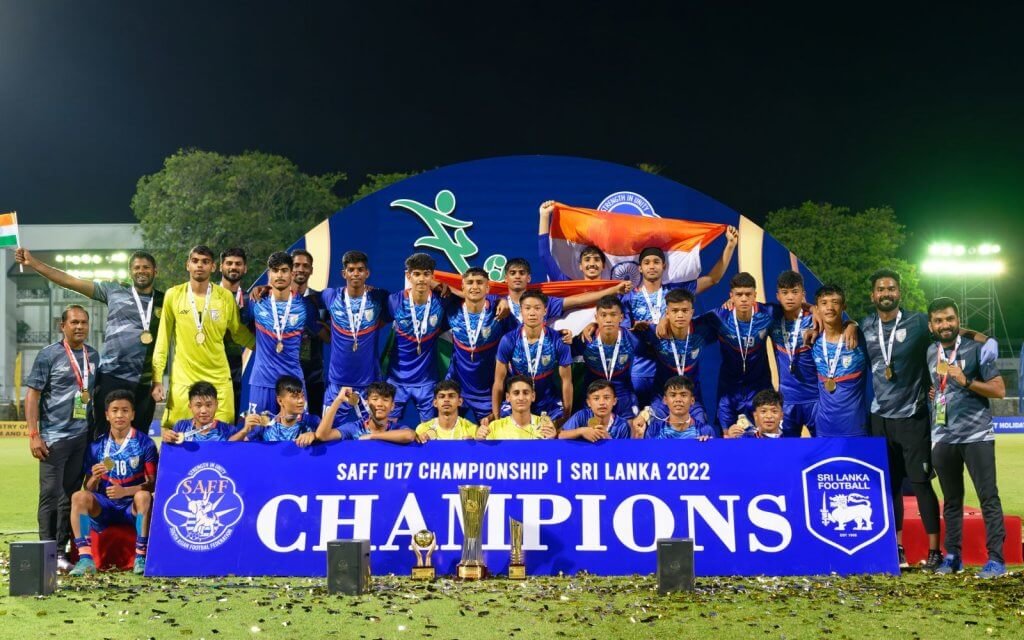 India finished off a clinical performance to clinch the SAFF U-17 Championship title 🏆, defeating a 10-man Nepal 4-0 in the Football Final.

Defending Champions India Took on Nepal in a Repeat of the Previous Edition’s Final in the Title Clash of the 2022 Saff Men’s U17 Final. The Nepal Football Team, Were Fancy Their Chances Against This Indian Outfit After Having Beaten Them Earlier in Their Group Stage Encounter Last Week.

Focussed on Learning From Their Mistakes and Putting It Behind Them in the Final, the Indian Camp Sounded Confident on the Eve of the Match.

“We Started the Tournament Well. But It Was a Nervy Start Nonetheless. This is the First Tournament That the Boys Are Playing for the Country, and That Can Always Give You a Few Jitters.”

India started the Saff U-17 Championship 2022 Campaign With a Victory Against Bhutan but Suffered a 1-3 Loss at the Hands of Nepal in Their Second Group Stage Game Before Turning Their Fortunes Around Against Bangladesh With a 2-1 Victory in the Semi-final.

India Take the Lead! With Boby Singh From the Left Flank Gets on the Scoresheet, Thanks to a Beautiful Cross From the Right Flank by His Skipper Vanlalpeka.

India extends their lead and this time it is Korou Singh via skipper Vanlalpeka Guite again. A beautiful through ball from the Indian skipper right down the center, leaving Korou one on one with the keeper.

IND 3-0 NEP He does it all by himself this time does, Vanlalpeka Guite. He takes a shot from the left flank and it evades the Nepal goalkeeper to go inside the top far corner. UNBELIEVABLE SHOT!

Aman Scored the 4th Goal in Extra time.
The substitutes get into the act now as Aman finds the net for India. GOAL NUMBER 4 and he has killed of this game.

The result was beyond doubt by the end, as India successfully defended their title. India captain Vanlalpeka Guite was named the Most Valuable Player of the Tournament, while goalkeeper Sahil won the Best Goalkeeper award.

India have been crowned the 2022 SAFF Men’s U17 Champions.

This was expected to be a tight contest, but turned out to be a cakewalk for India in the end.

Why Antoine Griezmann Can Only Play 30 Min Per Match?
SAFF Women’s Championship – Bangladesh VS Nepal