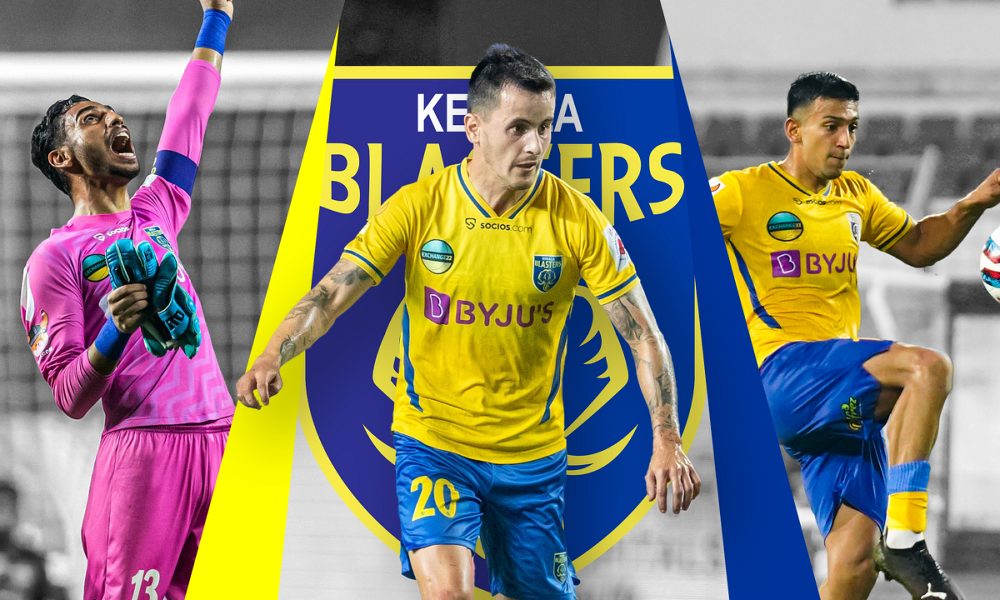 Kerala Blasters FC appears to be prepared for the upcoming season of the Indian Super League (ISL). With only a few days until the league begins, their fans are expecting nothing less than a championship this season. The club had previously reached the finals but lost in a tiebreaker.

let’s have a look at how Kerala Blasters could line up in the upcoming ISL.

Last season’s golden glove winner Prabhsukhan Singh gill in goal is safe. In fact, with the departing of albino gomes, his position as no. 1 goalkeeper appears to be even more secure.

Harmanjot Singh Khabra, 33, proved his critics wrong with a stellar performance throughout the ISL 2021-22 season following his Move from arch-rivals Bengaluru FC.
Nishu Kumar, a heavily paid defender who already has recently recovered from knee injuries, is going to be seeking an opportunity to prove his worth.

The 31-year-old Croatian defender was a fan favorite last season. The calm-headed defender came through for Kerala Blasters on numerous occasions. Leskovic was instrumental in Kerala Blasters FC’s playoff run.

He is simply the best at air battles. And his influential role within Kerala Blasters Squad cannot be questioned.

Hormipam Ruivah’s Ascension to the Top League Has Been Astonishingly Quick. In March, His Performance in the ISL Earned Him an Indian National Call-up.
He Formed a Strong Defensive Partnership With Marko Leskovic That Will Undoubtedly Be Remembered as One of the Best in the Isl 2021-22 Season. Vukomanovic Will Find It Difficult to Look Beyond Hormipam Ruivah and Marko Lekovi as the Regular Pairing for Isl 2022-23.

The Goan defender is anticipated to return to the lineup this season after bouncing back from a shoulder injury. Jessel Carneiro’s movement up and down the left flank, together with his free kicks and famous pin-point crossing expertise, will be crucial for the Kerala Blasters.

Sahal Abdul Samad scored six goals in 21 ISL games last season. Last season, Sahal Abdul Samad, an attacking midfielder, had the biggest influence on the flank as a winger.
Saurav Mandal, a new arrival who plays a similar role, will pose a challenge to Sahal this season. Saurav had a strong preseason.

Jeakson Singh, India’s only FIFA World Cup goal-scorer, has been consistent on the pitch since joining the club. Last season, he and Puitea formed the Blasters’ midfield pivot.
Jeakson Singh, 21, plays the game at his own pace in the middle of the park. Many of Kerala Blasters’ counter-attacks are set up by his quick thinking and accurate passing ability.

Ivan Kaliuzhnyi, a 24-year-old midfielder on loan from Ukrainian Premier League club Oleksandriya, will serve as a captivating inclusion in the center of the Kerala Blasters’ middle of the park.
Ivan Kaliuzhnyi had a strong preseason and is viewed as one of the favorites to start in this position. His natural game style fits well in the pivot role that appears to be given to him.

Adrián Luna, an Uruguayan midfielder, began the year as club vice-captain before taking over as captain when Jessel Carneiro suffered a shoulder injury.
Adrián Luna had six goals and seven assists in the ISL last season, his contributions on both offense and defense managed to earn him a spot on Khel Now’s ISL 2021-22 Team of the Season.

Kerala Blasters sign forward Bidyashagar Singh on loan from Bengaluru FC, where he faced stiff competition for a place in the Bengaluru FC XI just after a stellar season with TRAU FC in the I-League.
The 24-year-old Bidyashagar Singh is currently the squad’s only top-rated Indian striker, so a spot in the starting lineup is a strong possibility.

Here are the Kerala Blasters’ complete fixtures for ISL 2022-23 season.