Bangladesh defeated Nepal 3-1 in the Final of SAFF Women’s Championship 2022 at Dasharath Stadium on Monday. 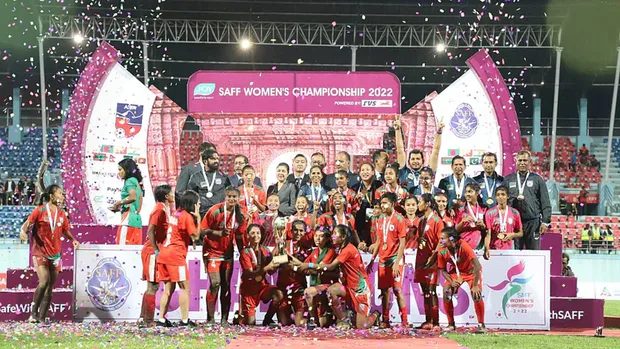 The Bangladesh team defeated hosts Nepal by 3-1 in the finals before a full stadium to watch some brilliant football on display. Bangladesh skipper Sabina Khatun, who was the top scorer of the tournament netting eight goals in five games, dedicated the trophy to the people of Bangladesh.

Krishna Rani scored the second goal for Bangladesh in the 42nd minute, following Shamsunnahar Jr’s opener in the 14th minute. After taking a 2-0 lead in the first half on a rain-soaked pitch and in front of a capacity crowd, Bangladesh came under tremendous pressure from the hosts, who pulled one back in the 70th minute through a powerful diagonal attempt. Bangladesh ensured victory with another expert finish in the 77th minute.

Bangladesh became champions in South Asian women’s football for the first time in the sixth edition, ending India’s reign of five successive titles. Hosts Nepal, meanwhile, had to contend with the runners-up trophy for the fifth time.

India Won SAFF U-17 Championship against Nepal in the final
Sidemen FC beat YouTube All Stars 8-7 in Sidemen Charity Match.