On paper, this looks like a fairly even contest with room for surprises from both sides but Chennaiyin FC will be a bit more confident after Chennaiyin FC come from behind to stun ATK Mohun Bagan in Kolkata

GOAL! 27 Minute: Manvir Singh and Petratos worked well together before Petratos slid the ball into the box, where Manvir side-footed it past the keeper and into the far corner of the goal, putting the hosts ahead on the counter-attack.

GOAL! 62 Minute: ATK Mohun Bagan goalkeeper Vishal Kaith brought down Kwame Karikari in the box after he came on as a substitute in the 59th minute. The Ghanaian took the penalty himself and scored Marina Machans’ 200th Hero ISL goal.

GOAL! 82 Minute: Karikari cut the ball back towards Rahim Ali. The striker buried the ball from the edge of the box into the bottom right corner to give the visitors a decisive lead near the end of the game.

Full Time: Chennaiyin FC scored crucial goals in the second half to upset ATK Mohun Bagan, who had dominated the first 45 minutes.

ATK Mohun Bagan created more chances, but they struggled to make the final pass, whereas Chennaiyin FC, who had previously struggled, rose to the occasion in the second half. 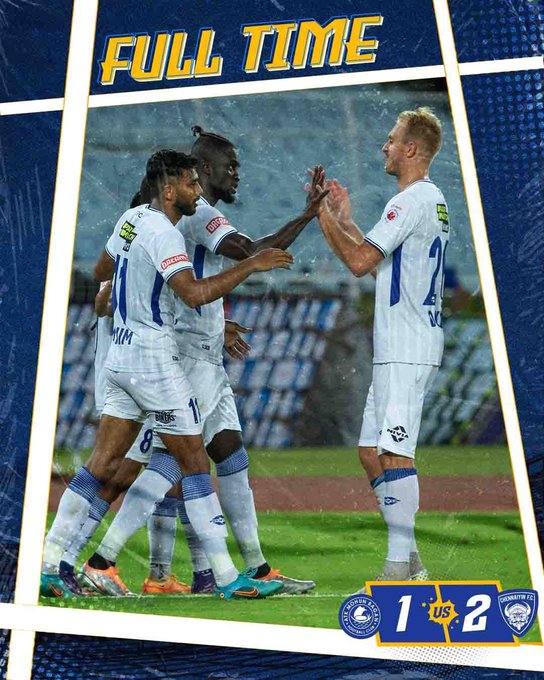 in ISL Match 5, Jamshedpur FC will host Odisha FC on Tuesday, at 7:30 PM, on October 11th, at the JRD Tata Sports Complex in Jamshedpur, Jharkhand.